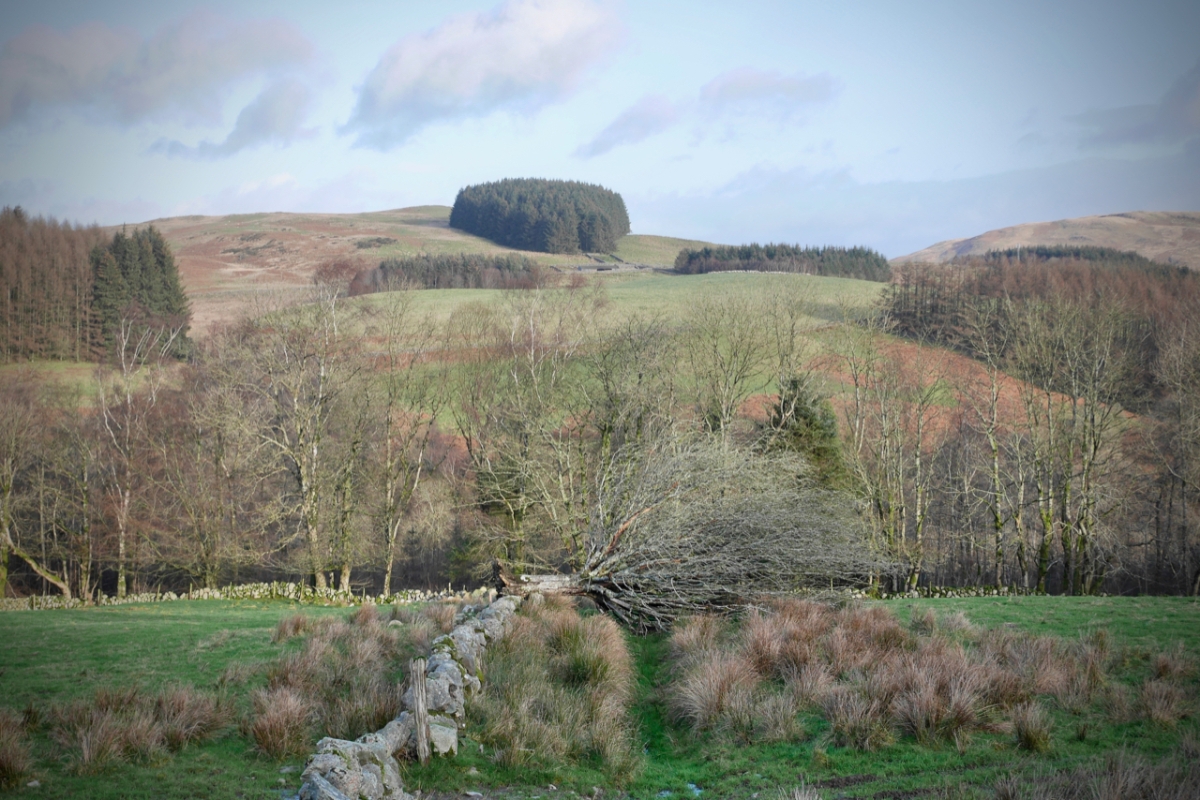 The rain is lashing against the gable end of the house after one of those nights of wondering if I would step outside to roof slates in the street. Days ago there was a male Woodpecker ‘ drumming ‘ in the woods behind the house and claiming a territory for Spring. Now you have to pick your days to find a weather window by working back from the weather forecast. I take an average between the usually pessimistic XC Weather and the baseline BBC.

We are going through a windy and wet followed by not too bad but cold followed by 12’c and what should I be wearing sort of cycle. There are days when we get all of the above plus a bit of snow.

Last week it looked like Sunday was going to be the best day of the week, right up until Tuesday turned from horrid to near perfect for January in the space of a few hours. Why they pretend to forecast 10 days or even two weeks in advance I have no idea.

So at short notice my pal Ian stepped in to be foreground interest in the photographs and came a gravel ride with me whilst Esther was away. We know each other from years of Audax miles and random events in Scotland. When I told him that half the gravel route was untried and had been dreamed up at the computer he was not even slightly worried, which in itself was worrying. Ian is a rough stuff fellowship rider. I was more worried than he was. 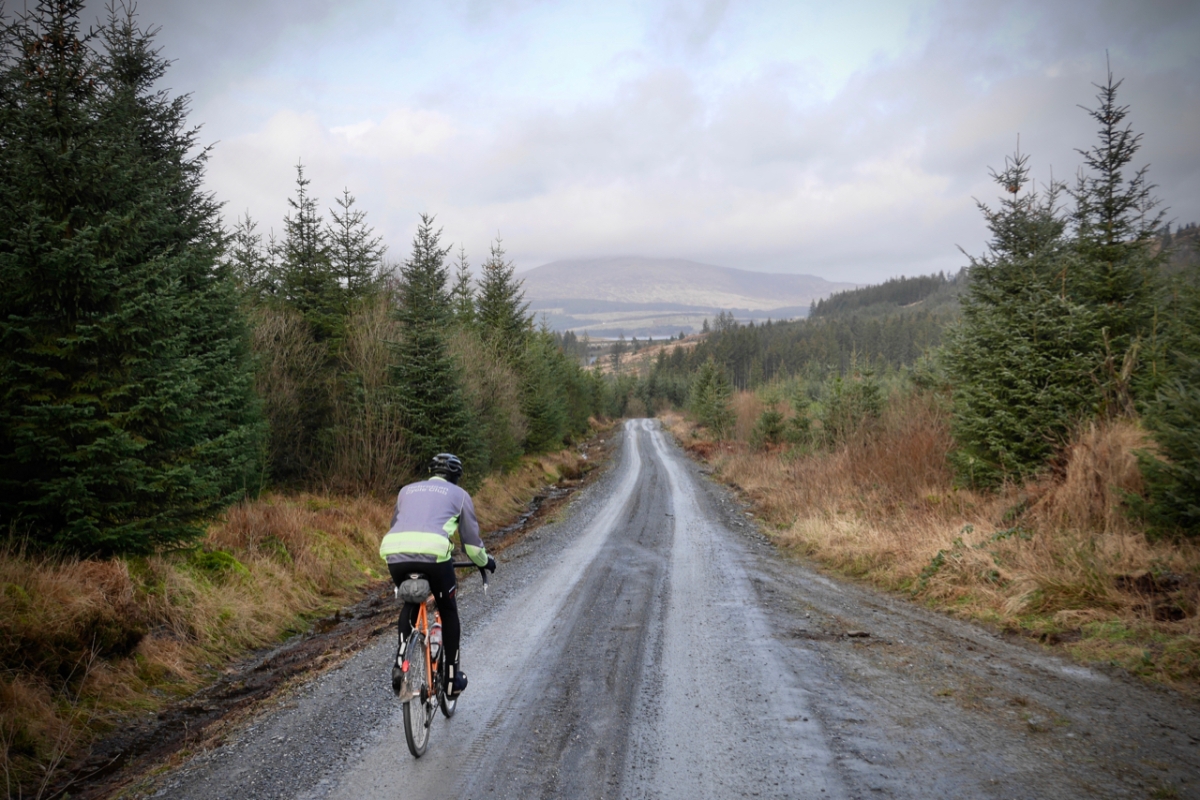 The route was a little short, so I put a big chunk of distance on at the start and to give balance, I put a load on the end as well. It began in Gatehouse of fleet and gained height along the back road by Carstramon Wood before turning left and heading for the old station. 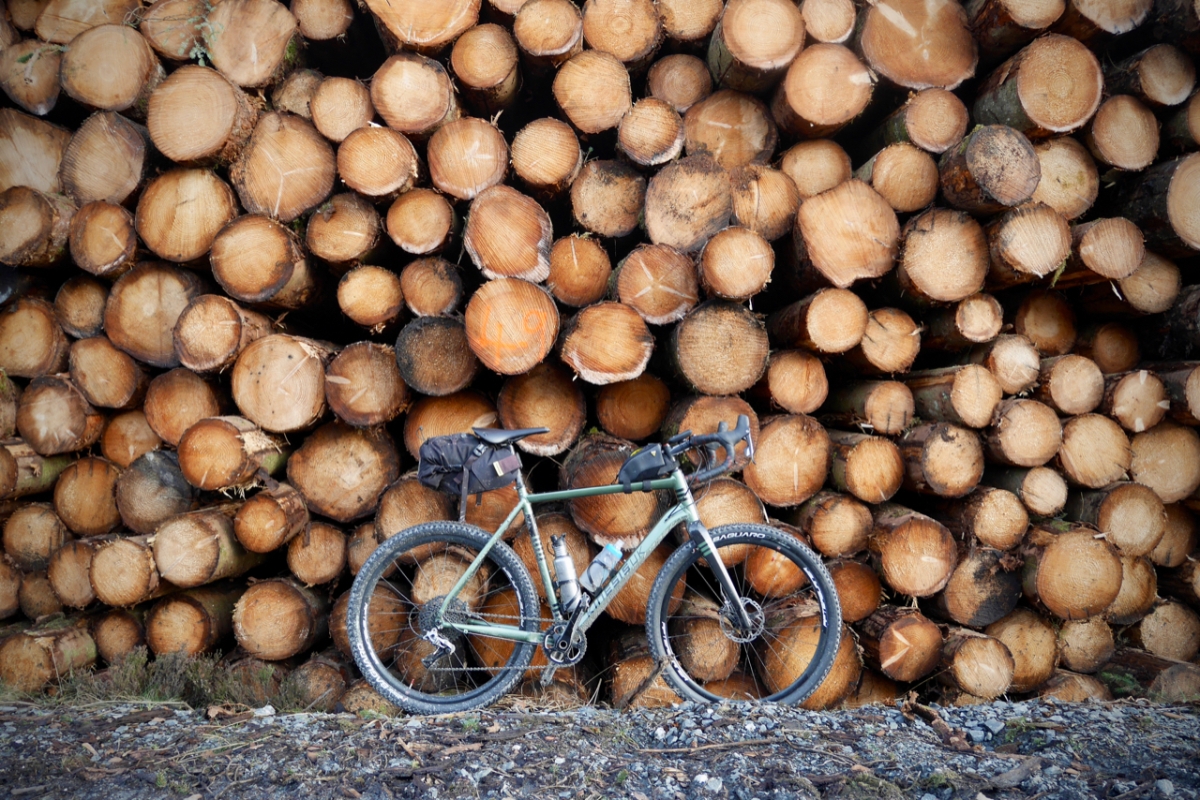 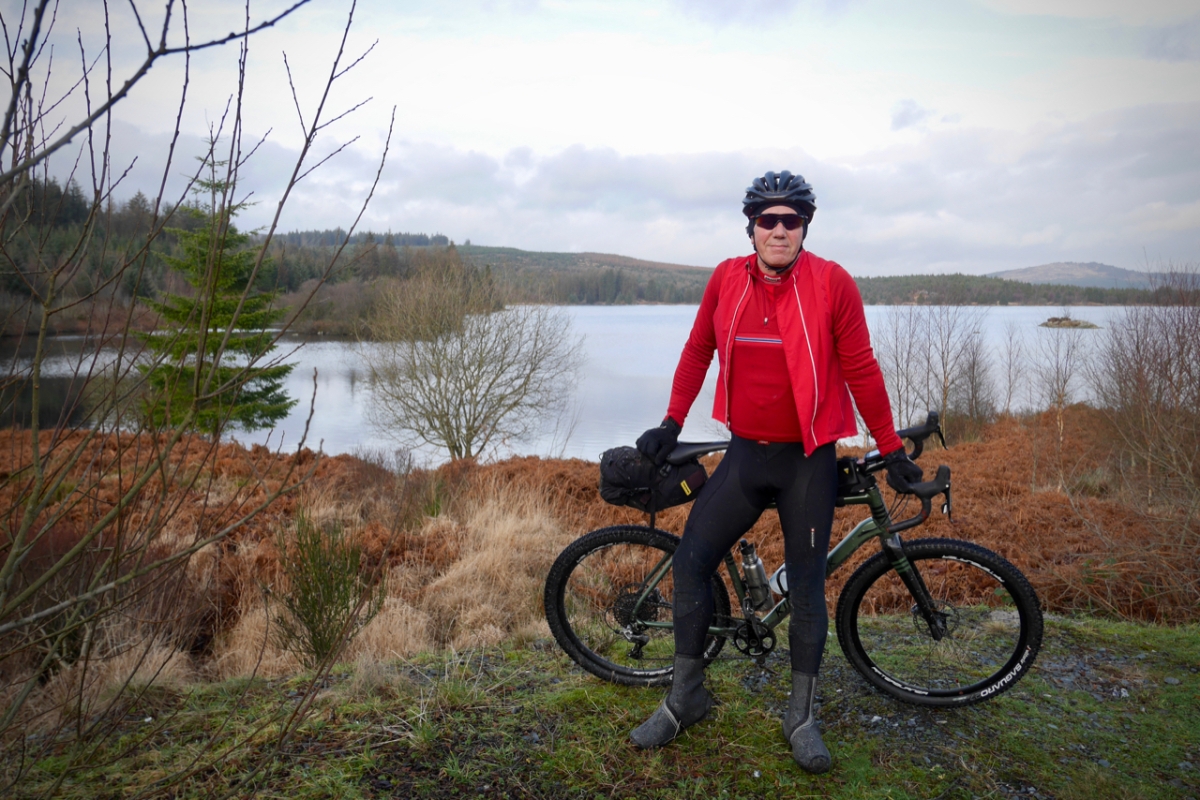 The first half is simply following the off road national route 7 to the Queen’s Way. You can go a short bit of tarmac to Clatteringshaws Cafe for a scone with a view. Retracing your way to Route 7 you now take the first left to ride on the opposite bank of the River Dee to the Raiders Road. 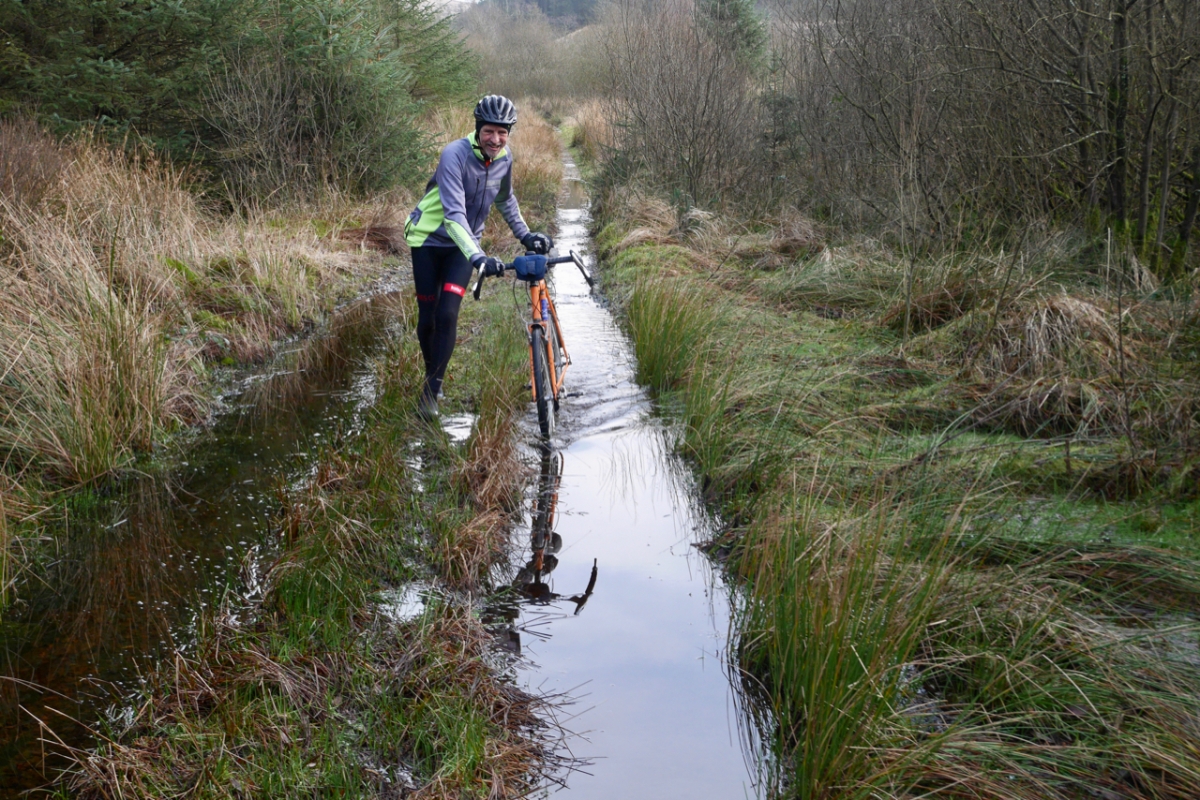 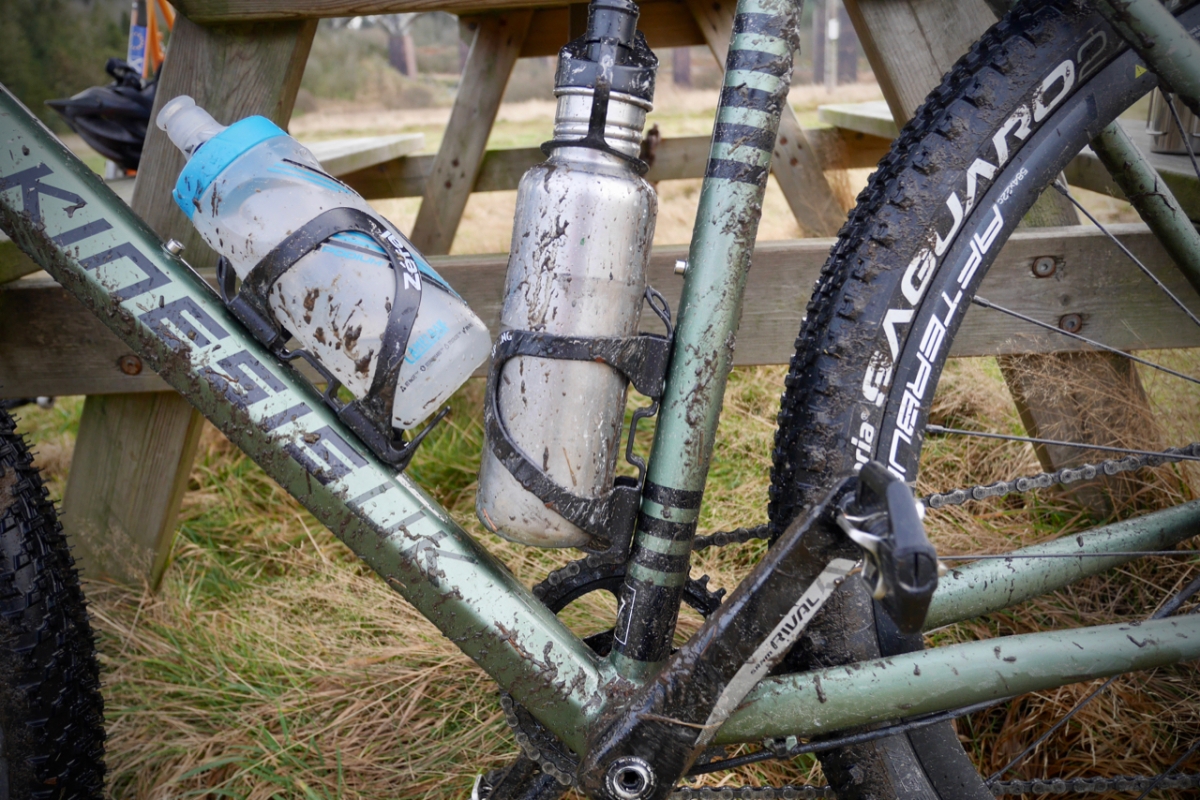 This is all new to me and rather beautiful giving new views of the glen. I may even prefer this side particularly when I met a fox walking towards me. Of course just when I thought it was all going to work out and with just 4 miles left to close this part of the loop it got wet and muddy and then cold as well. Then the path got fringed by small trees that flicked their branches in your face as you tried to pick a good line. 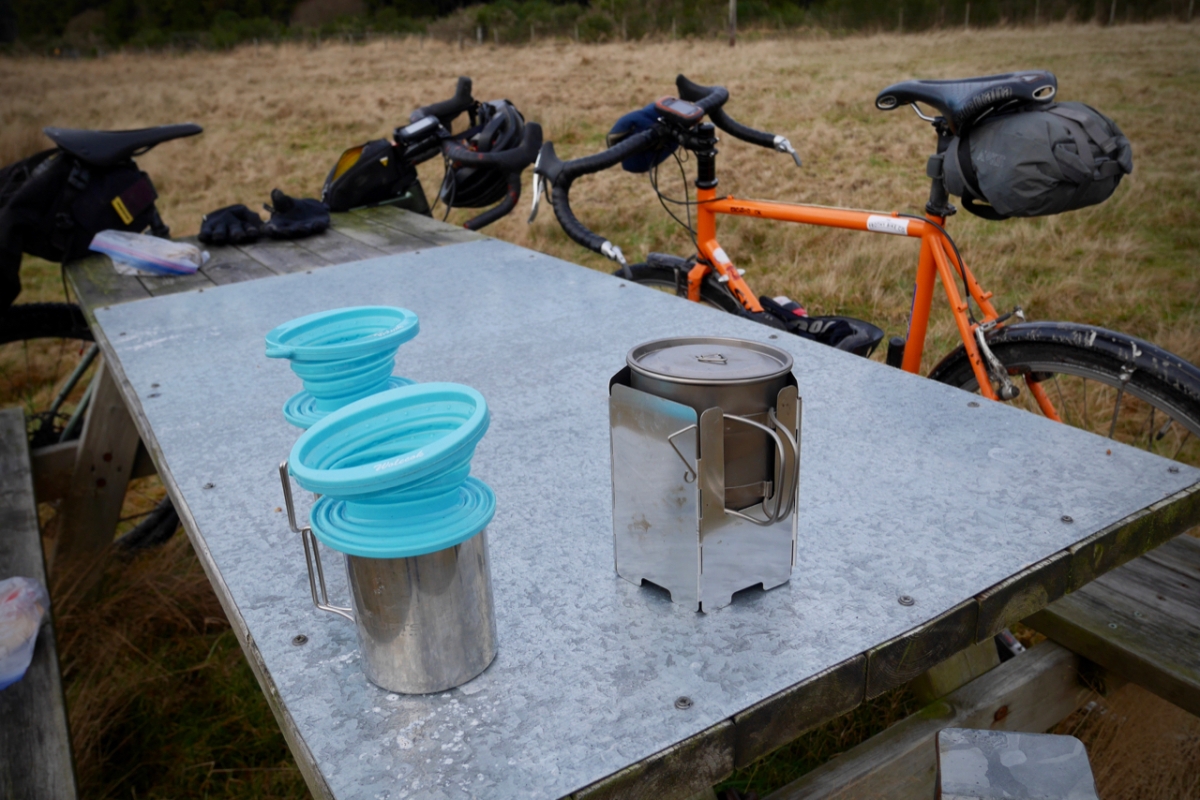 The plan was to stop and make coffee near the Gatehouse viaduct which we did, despite it now being just 3’c. The extra bit of distance now had to be done in failing light. A great day though and gosh was it hard. You never want to admit to finding a ride tough, but I thought I would break the rules and ask Ian what he thought. There were swear words. Off road still catches me out and winter miles are tough. Happy 2020, and make sure you get out and do stuff.

Friends of the Road